How do you market a product that people don’t need?

People listen to music. But the rise of streaming services and easily accessible free content make it hard for musicians to sell individual records.

David Paige has been a musician for 17 years. And as much as he loves music and performing, he also knows that he needs systems to run the business side of being a creative.

“One of the biggest challenges that I’ve found in marketing as a musician is that music is not a necessary thing for people to have in their lives…I also have to battle with the fact that I can’t market it in the quite the same way that I would market another good.” – David Paige

How can a musician:

When he needed to build relationships and promote his music, David Paige turned to ActiveCampaign.

How to build online relationships at live events

For a musician, the people who come to live events are the most engaged audience around. It makes sense to talk to them differently.

“These are the people who love to come to shows, and are going to be interested in future shows.” – David Paige

There’s a huge difference between someone who comes to every show and someone who signed up for an email list a long time ago.

When you’re talking to your most interested fans, you sound different. You can tell them about shows in their area, get them on pre-releases, make exclusive offers—they’re a group of people that you know is ready to buy from you. Because they’ve bought from you in the past.

Someone on your email list? They might not be ready to buy right away.
Of course, in order to target people who go to shows, you need to know that they go to shows!

The ActiveCampaign Forms App for iPad makes it possible to collect contact information at events (even if you don’t have an internet connection.

It even lets you add tags, so that you can tell which event people sign up from—and if they bought anything. 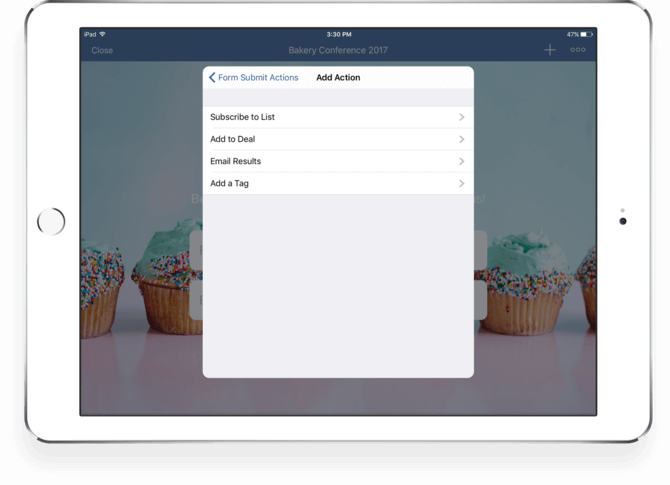 Now you know that this contact came to an event. You know if they bought something there. And you can talk to them (and make them offers) based on that knowledge.

What about everyone else?

Touring and shows are a huge part of being a musician. But just as important to David Paige is selling music through his Shopify store.

Because music is difficult to sell, it’s so important to be able to create relationships. To build an emotional connection.

Music is an emotional product. David doesn’t want to push people to buy music they aren’t ready to buy—he knows that pushing for the sale right away (before contacts know anything about him) is more likely to scare people off.

“With music being so difficult to sell, you really need to have that emotional buy-in from the people that you’re talking to before they’re going to be willing to actually purchase.” – David Paige.

So how does he do it?

Welcome emails and an automated nurture sequence let David send new contacts messages right away. ActiveCampaign lets David see who’s opening and clicking on each email, so he knows which subscribers are the most interested in his music.

Lead scoring is a simple idea—when a contact takes an action that you care about (like opening or clicking an email) you can automatically add to their “score.”

Because you add to the score when contacts engage with your messages, a contact’s score is a number that tells you exactly how interested they are in what you offer.

And when the score gets high enough? You can follow up with a sales offer—automatically.

That’s exactly how David Paige approaches his nurture sequence. First, he sends conversational content that helps people understand what he’s all about. Then he automatically targets the most interested contacts and asks them to buy his music.

“My open rates are insane”

“I used to get 20% open rates and I thought I was doing really good. And then when I switched to ActiveCampaign and I started implementing some of these strategies, I’m seeing 50% and higher. My first few emails are all in the 80% to 50% range.” – David Paige

ActiveCampaign helps David Paige talk to and build relationships with his fans.

The automations he uses result in incredibly high open rates. The clickthrough rates on those emails are similarly high.

Best of all, because he’s able to target his most engaged fans, music sales have increased through his Shopify store.

Is that all? Of course not!

Even once someone has been on his email list for a while, there’s a huge benefit to building these kinds of relationships. Instead of blasting a list with pushes to buy music, David has a list of engaged fans.

Now he’s built meaningful relationships . Now he can send genuine offers. And when he comes to a fan’s city, he can shoot them a message. If they come to the show, he can close the loop with an iPad form at the event.

ActiveCampaign helps David Paige sell his music—and build relationships with his fans while doing it.

Could it do the same for your business? You can try a 14-day trial of ActiveCampaign for free (no credit card required).