What’s the difference between using a Go To vs. a Goal action when building an automation?

Both actions will “jump” contacts to another step in your automation based on certain criteria. But they work a bit differently, and it may not always be clear when to use one over the other.

This guide will explain the difference between the two and provide example use cases for each action.

When to Use the Goal Action

For example, let’s say you have an email campaign series targeting contacts you hope to get enrolled in a new course you’re offering. You plan to send four emails promoting the course, but once a contact enrolls, you do not want them to receive the rest of the emails in the series.

This where a Goal action comes in handy:

In this instance, you’ll want to configure the Goal action to cause a contact to jump from anywhere in the automation once they have the tag “Enrolled in course” (you can use a separate automation to handle the application of this tag).

Now, when a contact enrolls in your course, they’ll skip the rest of the email steps and jump right to the Goal action in the automation.

Goal actions are more dynamic because they allow contacts to jump from anywhere in an automation. Contacts can be before a Goal action, after a Goal action, or in a different branch—it doesn’t matter. Once they meet the Goal conditions, they’ll jump to the action.

When to Use the Go To Action

A Go To action will jump a contact from one specific point in an automation to another.

Go To actions are often useful in automations that have multiple paths or branches. With multiple branches, a contact can only move down one path—whichever one is true. After they move through that path, the automation ends for them…unless you use a Go To action.

The Go To action can help you combine paths in an automation with multiple paths, or help you move contacts through more than one branch and prioritize one over the other.

Going back to the course enrollment example we used above, imagine you’ve been pre-selling your course for the past couple of months while building it. Now that it’s complete, you’re ready to provide login credentials to those who have already enrolled, and want to let the rest of your contacts know they can now enroll and get started on their coursework today.

To do this, you can create a simple automation that checks to see whether or not contacts have the “Enrolled in course” tag and advances them down one of two paths:

If the contact does not have this tag, they advance down the path on the right, which sends an email promotion then waits until they have the “Enrolled in course” tag before adding them to the next automation to get their login credentials.

If the contact does have the tag, they advance down the path on the left to the Go To action, which reroutes them around the “Enroll today” email to the step that adds them to the next automation.

In sum, ActiveCampaign provides you with two powerful actions to progress your contacts through automations based on their behavior. While goals are more dynamic, and Go To actions are more sequential, we recommend combining the use of both to create the best experience for your contacts.

You can read more about using the Goals action in this article. 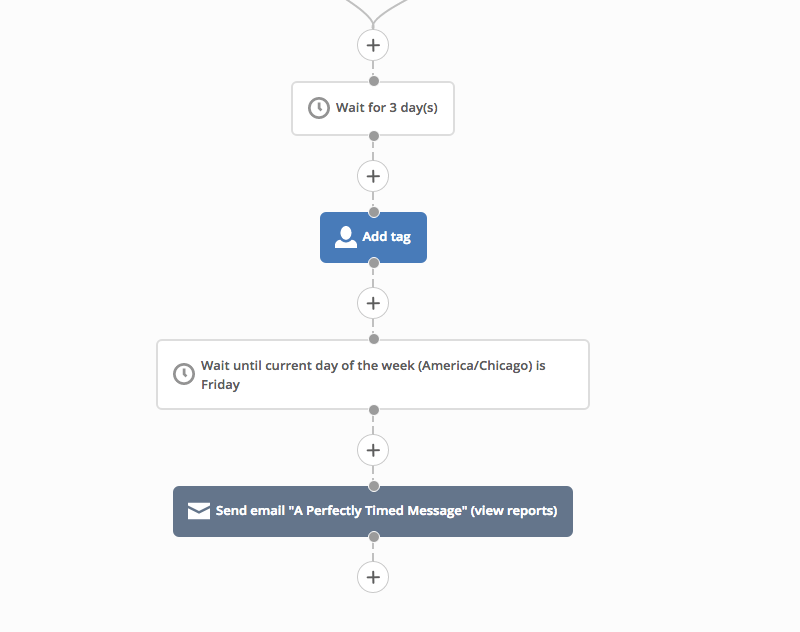 How To Send Perfectly Timed Messages

Marketing automation is all about getting the right message in front of the right people at the right time. Using a platform like ActiveCampaign that allows robust timing capabilities is...

A Beginner’s Guide to Lists

The primary purpose of lists is to segment your contacts at the broadest possible level. This guide further explains that, defines list types, and explores the other functions that lists...

What Is Marketing Automation?