One of the simpler, but very popular features of ActiveCampaign is the ability to easily create a new campaign based on a previously sent message with the Resend Options button. It’s a simple trick that saves time by building on the work you’ve already done.
You can find Resend Options by clicking the down arrow next to a sent campaign: 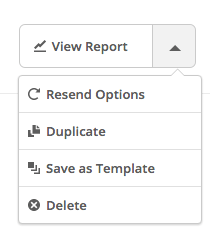 Clicking it will display a modal window with your resend options: 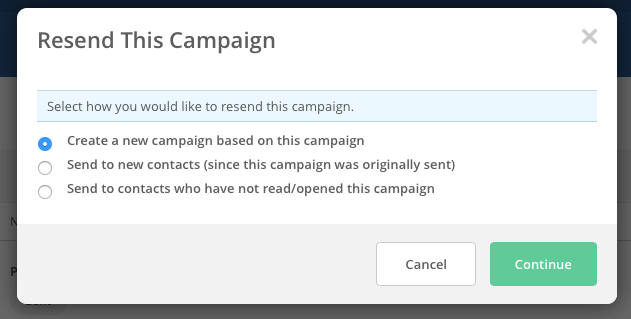 “Create a new campaign based on this campaign” is the most commonly used option, but we’ve long felt that “Send to new contacts (since this campaign was originally sent)” and “Send to contacts who have not read/opened this campaign” were the unsung heroes of this feature. To explain why, we’ll need to elaborate on what each of these options do:

Both of these options allow you to easily maximize the contacts who see your email while avoiding resending the campaign to someone who has already seen it.
However, in reviewing our customer feedback we’ve found that a common concern is that both of these options resend with exactly the same subject line.
Today we’re fixing that. Now you can modify the subject line before resending your campaign.

This is important because it’s possible that contacts didn’t open your campaign the first time because your subject line didn’t appeal to them. Jay Baer of Convince & Convert reports that 35% of people will (or will not) open an email based on subject line alone! It’s not uncommon to see a 65-150% or greater increase in opens by changing the subject line of a campaign.
We think this update makes this already useful feature even better. If you have an idea for how we can make ActiveCampaign even better, please let us know in our customer feedback forum.