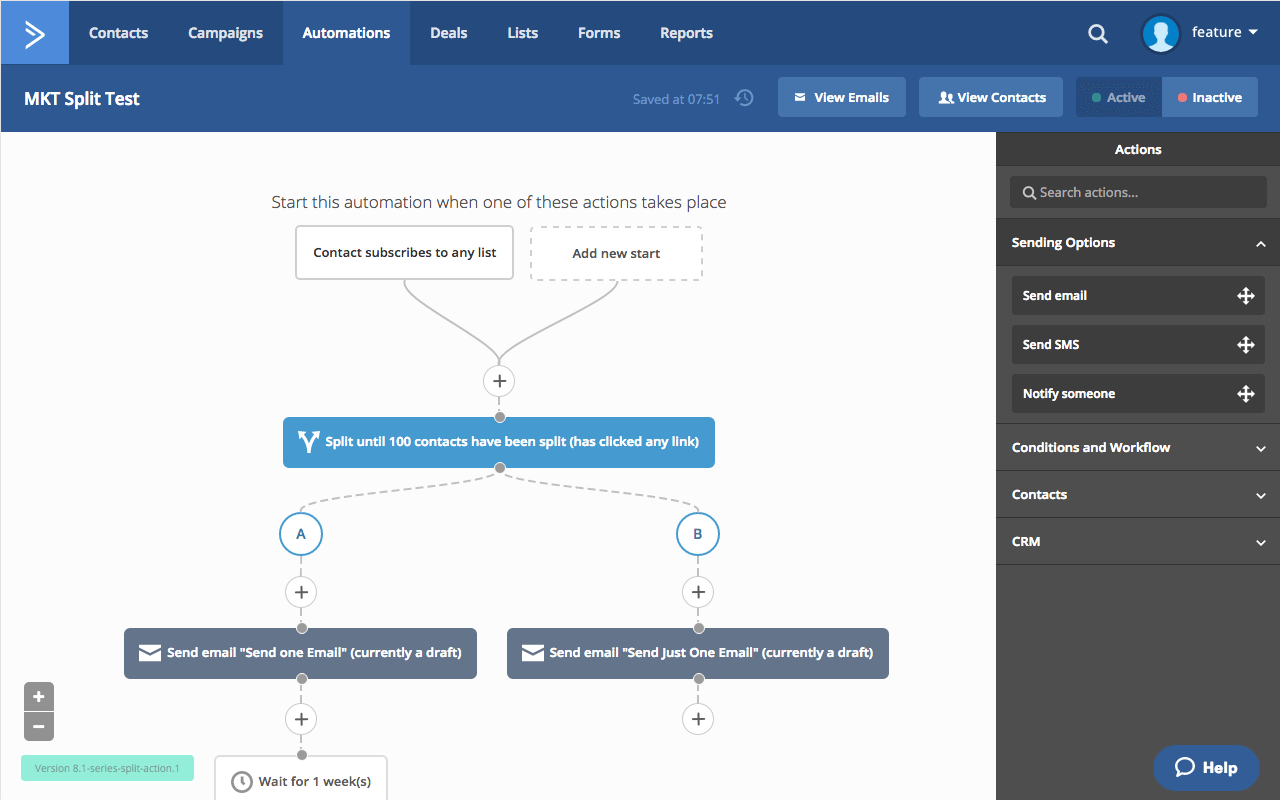 Do you know what that is?
That’s right. That’s not your eyes playing tricks on you.
That’s a screenshot of the new Automation Split Test, which we are rolling out today and should be available in your account in the next 24 hours.
We are really excited about this release, since it is one of our most asked-for features. Automation Split Testing allows you to create A/B split tests inside your automation sequences. Now you don’t have to wonder which marketing & sales approach is most effective, and you can optimize your automated follow up so it becomes increasingly more effective over time.
In addition to A/B tests, you can also create conditional paths that route contacts through one path until a condition is met (date has passed for example) and a different path after.
The ability to A/B test has been available to email campaigns for a while, but this brings that power to a whole new level of flexibility and opens up a whole new range of variables you can optimize.
We’re super excited about this, because the ability to A/B test entire automations is something that doesn’t even exist as a feature offered by our highest priced competitors.

To create a Split Test in an automation, drop the new Split action onto your workflow (you can find it in the Conditions and workflow category of actions). You are able to create both an “A” path and a “B” path, as well as set conditions for when the split test has concluded. Once those conditions are met, the automation will automatically route any additional contacts through the winning path, based on criteria you define. 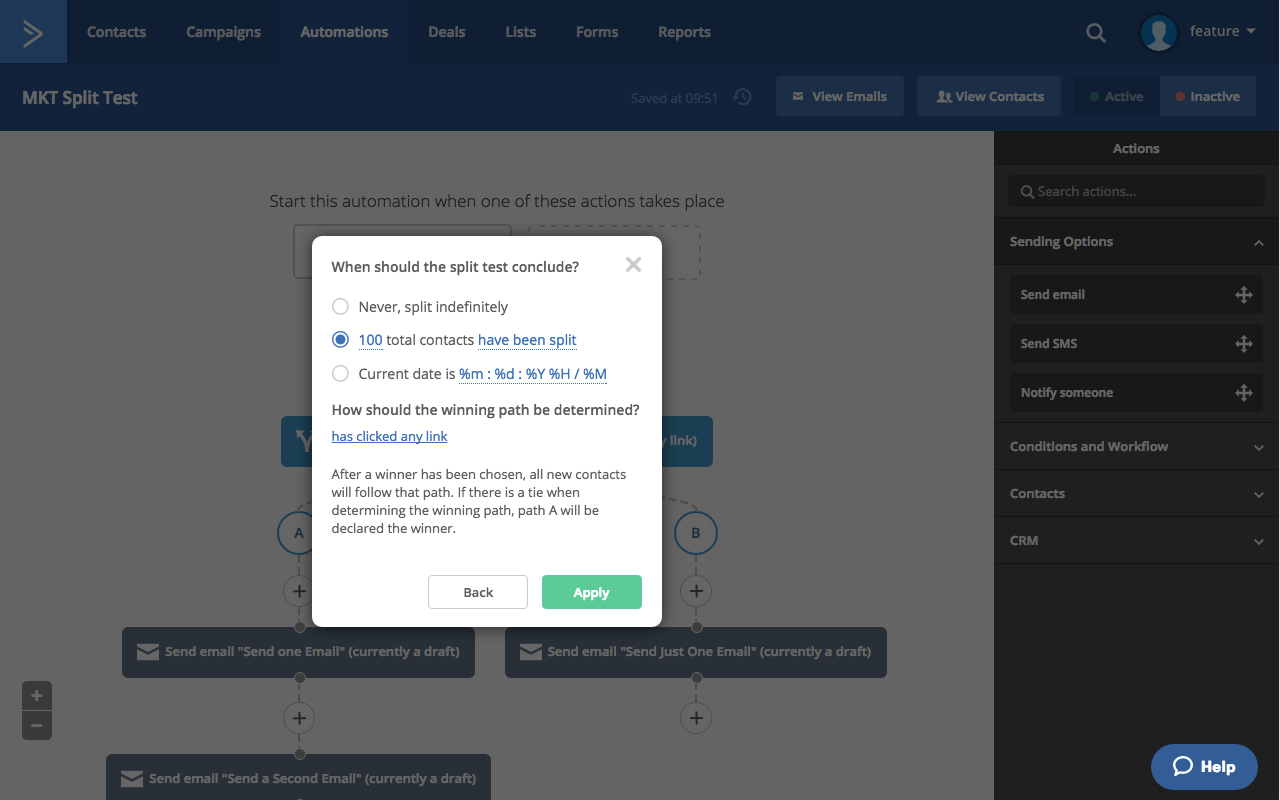 When building an A/B split test in ActiveCampaign you are able to define the criteria for when the split test will conclude:

The obvious use case is to A/B test email campaigns inside of an automation, but you can also use Automation Split Testing to test entire automation sequences.
The possibilities are endless, so to start I have put together a few examples to get you inspired.

Test the effectiveness of two follow-up emails or three
Sending the right amount of messages with the right timing can be a tricky thing to pin down. You want to stay top-of mind, without pestering your contacts. Up until now it was a best guess as to how many emails should be included in an automated drip email sequence, and how often to wait between them.
With Automation Split Testing, you no longer need to guess. You can now create two separate automation sequences, and experiment with the number of emails in each sequence, and the wait time between them. You can even test the best time of day to send.
When you have limited inventory of something
Creating a sense of urgency can be an extremely effective way to motivate your contacts to purchase. Automation Split Testing can be a great way to create that exclusivity without too much manual overhead.
With Automation Split Testing you can now create a “conditional” split test, to send messaging up until a date and time, or until a certain number of actions have already been taken.
For example, you could use split test automations to send messaging about an event with limited seats.
Or you could create a limited time offer, to create scarcity around a discount code or flash sale.
Test what should trigger adding contacts to your CRM
We talk a lot about the right balance between automation and forming real human-to-human relationships. Until Split Test Automations it was a marketers best guess to decide when to reach out to a contact or when to let an automation handle everything.
That is no-longer the case. With Automation Split Tests, you can test what actions should trigger a pro-active follow-up.
Test which email alternative produces the best results
I recently wrote a blog post about all the alternatives to emails that you can use to follow-up with your contacts. From [programmatically] sending a hand-written letter, to sending a basket of pears.
But which “personal” follow-up is the best? Stop guessing and find out by creating a split test!
Test purchase follow-ups
After a customer makes a purchase can be a great time to get them to do something on your behalf, but what should you ask them to do? With the new Automation Split Testing you can try all kinds of things, like ask for a review or ask them to share their purchase on social media, or suggest a complementary product for purchase.
You could even split test which complimentary product to offer!
Go on “semi-retirement” and reduce your workload by half
Its rare, but occasionally you will want to reduce the amount of business you are doing. My wife and I recently had a baby for example, and we needed to scale back her lead-nurturing campaigns for her photography business because they were creating too many hot leads (thank you ActiveCampaign!).
We didn’t want to completely shut everything down (diapers are expensive), just scale back a little. We ended up pausing her automations for the time being, but we could just as easily reduced the amount of business by half, by taking advantage of split-testing automations to divert half of her leads to a more laid-back automation sequence.
This is probably a rare example, but it could also be applied for a business in the service-sector that is hoping to productize their offering. They could reduce the amount of new business by half, and use the additional time in R&D.
So much more!
We know this is a much-requested feature, and we are excited to get it to your hands. Let us know in the comments or the forums what you plan on testing!