This post was contributed by Justin Zimmerman of Salesmsg.

Nowadays, people don’t answer the phone until they absolutely have to or know exactly who is calling them. But when you send a text message, people respond quickly.

Why? In the United States, 97% of people own a cellphone of some kind. Consumers have easy access to SMS notifications that they can read at any time. As a result, SMS has a 98% open rate.

To help your business take advantage of increased open rates, try these real-world short texts in your ActiveCampaign SMS automations. Then, watch your reviews, referrals, and sales increase.

Canada’s number one real estate recruiters Jim and Tracey Ouellete recruit nearly 250 agents a year. That’s over $1,250,000 a year in revenue to their company RoyalLaPages. So, when asked about their success, he said it’s all about follow-up and good time management.

Before adding ActiveCampaign SMS automations via Salesmsg, Jim would spend hours of his Sunday manually copying and pasting texts into his phone and sending them one by one to contacts.

Here’s how their ActiveCampaign SMS follow up automations works:

Jim books a meeting with potential recruits and after his presentation. He says: “I just click a button they attended and that button will automatically put them on a little follow-up drip campaign, every two to three days.”

His SMS automation continues for two weeks. If nothing happens after a month the campaign automatically shifts to follow up every two months.

During that time, if a candidate replies back with “I’ve decided not to join or I joined a different brokerage,” Jim clicks another button inside ActiveCampaign to move them to an SMS automation that follows up every two months. 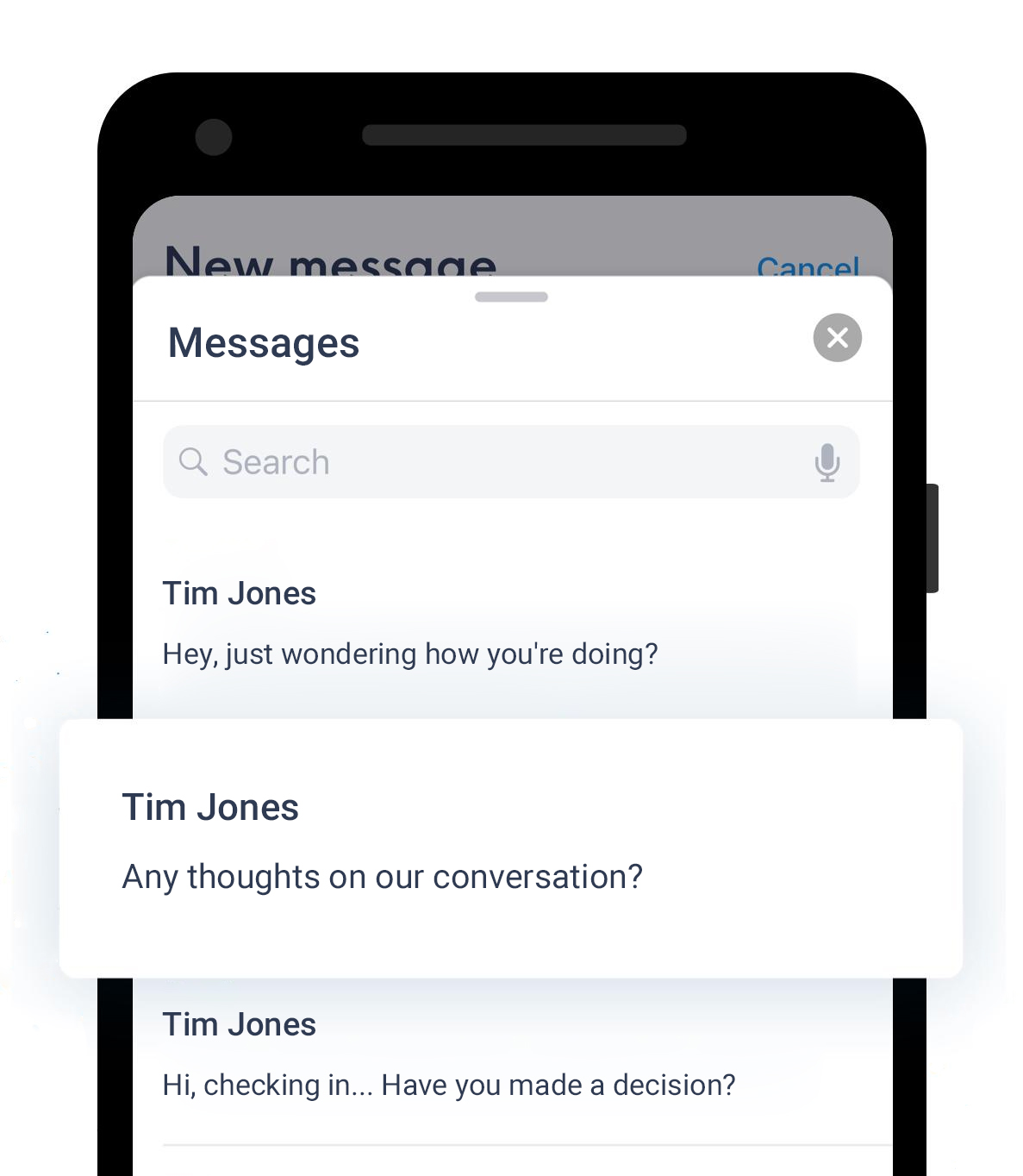 The whole SMS automation is powered by short texts.

Hey, just wondering how you’re doing?
Any thoughts on our conversation?
Hi, checking in… Have you made a decision?

From these short texts, Jim says he gets replies like, “you’ve been sending me texts for two or three years so I thought I’d give you a call.”

If you’re wondering, their automation is a total of two years long. After that, it starts over.

It’s not complicated and Jim tells people he’s “not a tech person.” But when asked to give advice to those starting out with ActiveCampaign SMS automations, he confidently offers this suggestion:

“The shorter the message, the better, the better response. The less salesy.”

These results are worth taking note of. The business recruits a lot of people much easier than before, and the best thing, Jim got his Sundays back.

During the pandemic, Stacey the Loan Lady had the best year of her career. The Utah-based mortgage broker closed 100 loans. Alone. Yes, without an assistant or employees helping her.

This is a phenomenal amount of business, which Stacey credits her success to truly caring.

But hiding under her success was a bad case of work-a-holism. Every day for eight months, she would start work at 7:00 am and would go full steam until 9:00 pm.

That’s not sustainable. As she describes it:

“I’ll be totally honest with you. It drained me and I will never do that again by myself… The last year has been [about] duplicating myself… And that includes setting up systems that automate me… So I don’t have to have the same conversation over and over and over.”

This experience taught her two things. She needed an assistant (who she has since hired), and she desperately needed systems to “duplicate” herself.

Here are 5 things you can do with ActiveCampaign SMS automations and Salesmsg to prevent burnout. 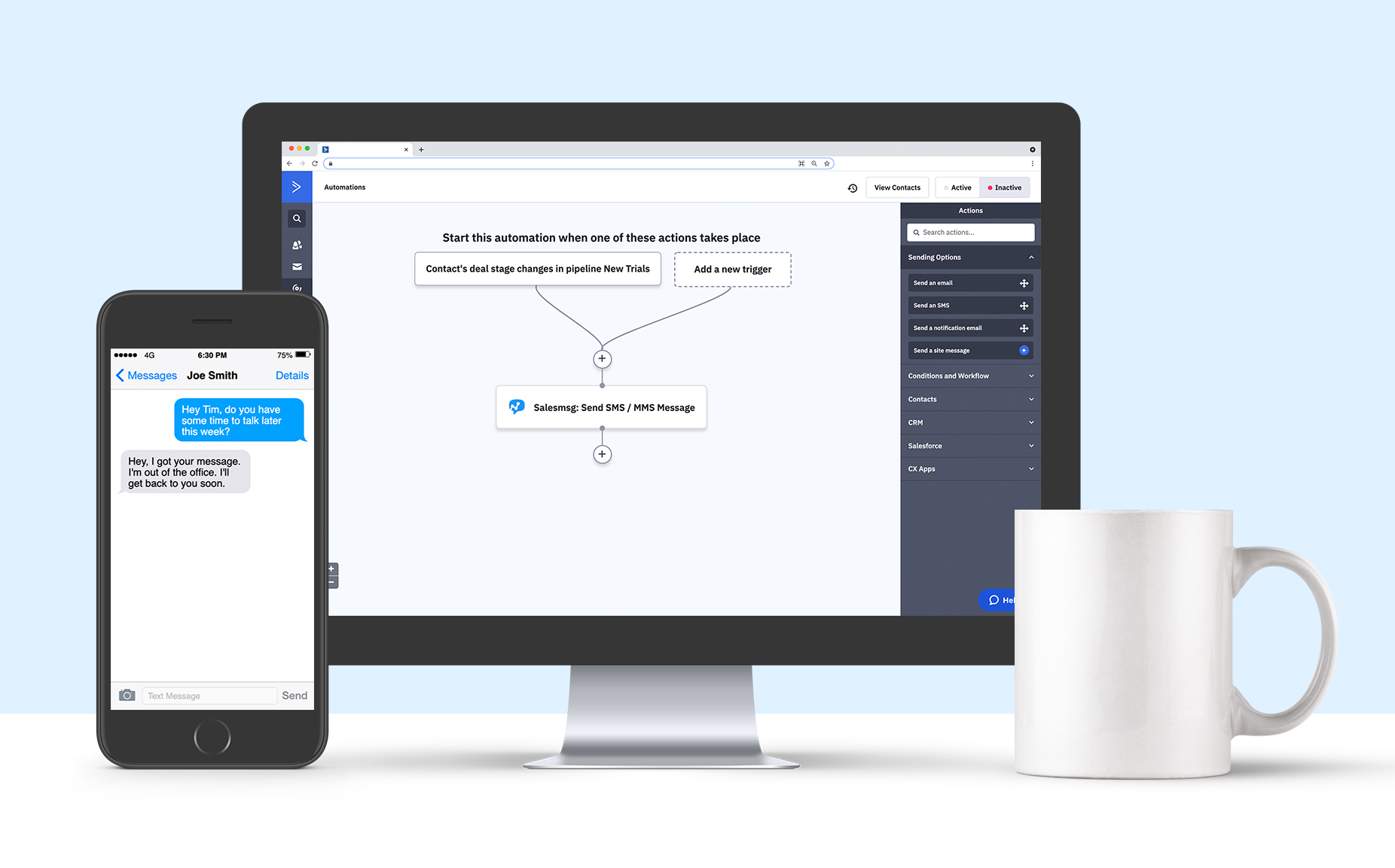 1. Record your most common conversation. Then, add them into an ActiveCampaign automation manually or through a video email service that natively integrates. 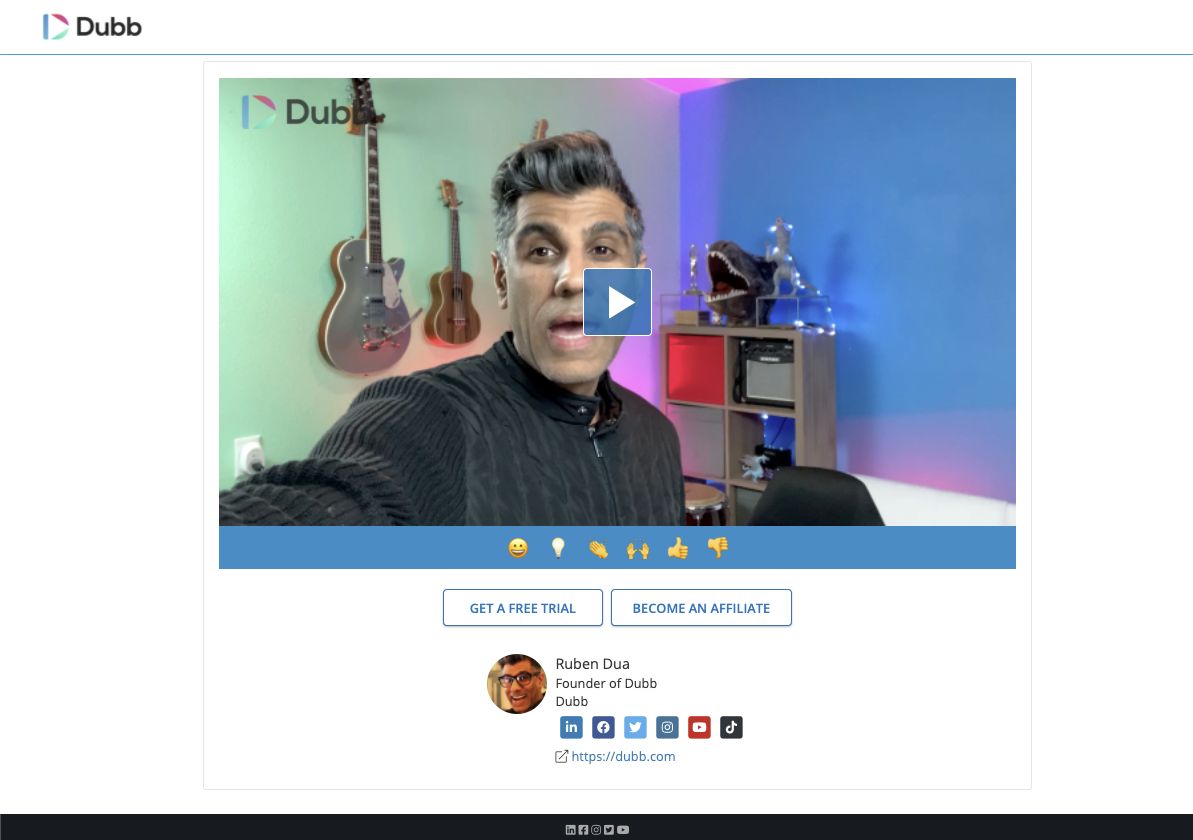 2. Use the Salesmsg “Canned Message” feature. Write out the answers to your most common questions. Then, let an assistant get into Salesmsg to respond for you. 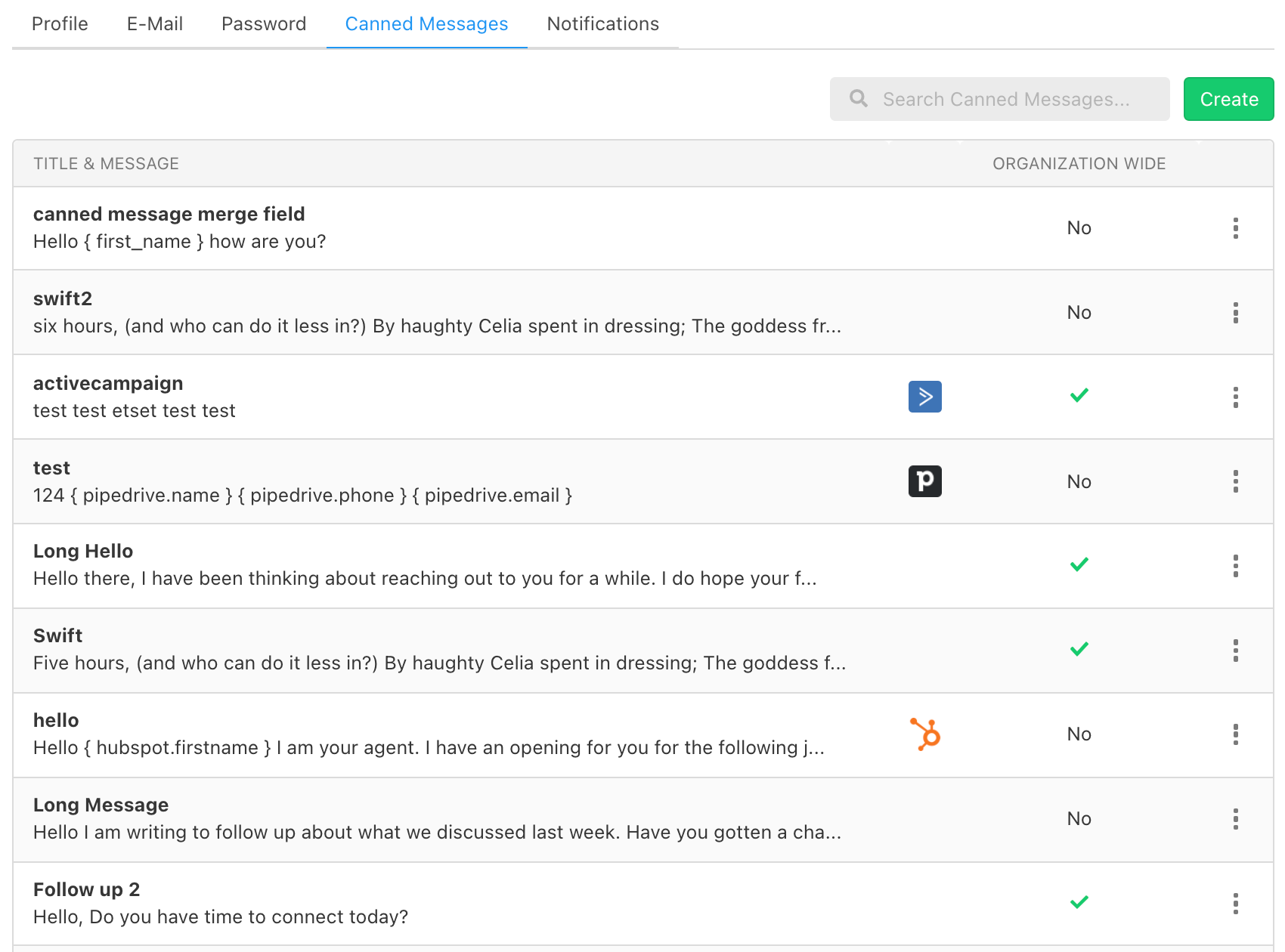 3. Turn on the Salesmsg “Out of Office” SMS reply feature. If it’s after 6:00 pm on a weekday or it’s the weekend, let it respond for you with “Hey, I got your message. I’m out of the office. I’ll get back to you soon.” 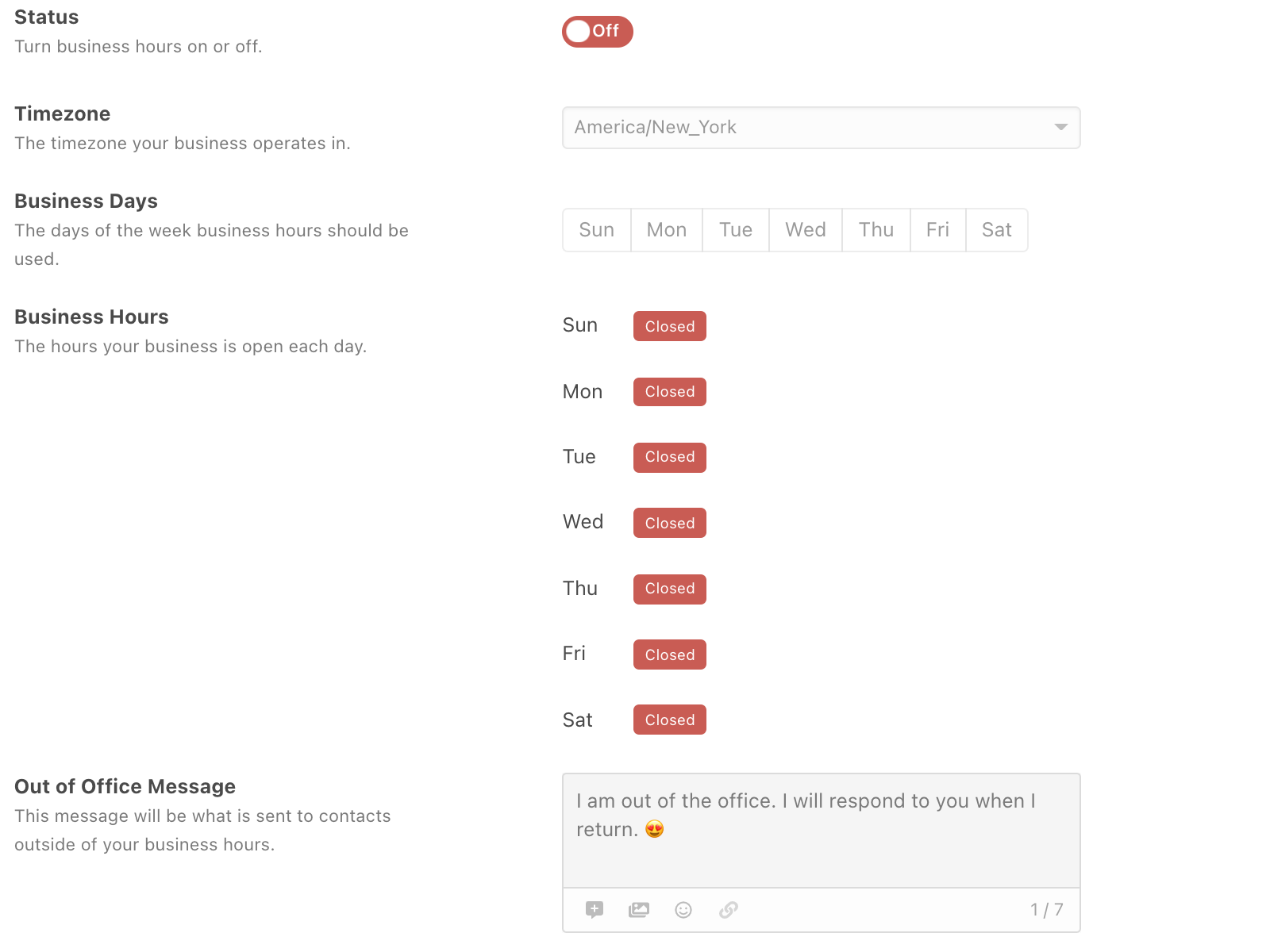 4. Configure ActiveCampaign as a deal management tool. When a lead or a deal moves to the new stage, trigger a Salesmsg SMS to all involved parties using custom fields, so you can personalize the message without individually updating everyone.

5. Create a mini ActiveCampaign SMS newsletter list. For referral partners who value links to blogs, videos, and trainings, send a Salesmsg SMS to your partners periodically.

ActiveCampaign SMS Instead of Cold Calling

What if you never had to cold call again? Now imagine how it would feel if prospects automatically filled your calendar every day.

What if you could turn old abandoned leads into ten thousand dollars every month? Now imagine you’re simply sending short text messages to achieve that goal.

Well, this is the life and business of Jim Webb.

He went from pounding the phones as his outgoing marketing strategy to only making phone calls until he had an appointment.

And since Jim is a numbers guy, he knows exactly what it takes to turn contacts into contracts:

Jim’s results aren’t based on luck. They are based on a simple four-step formula anyone can do. 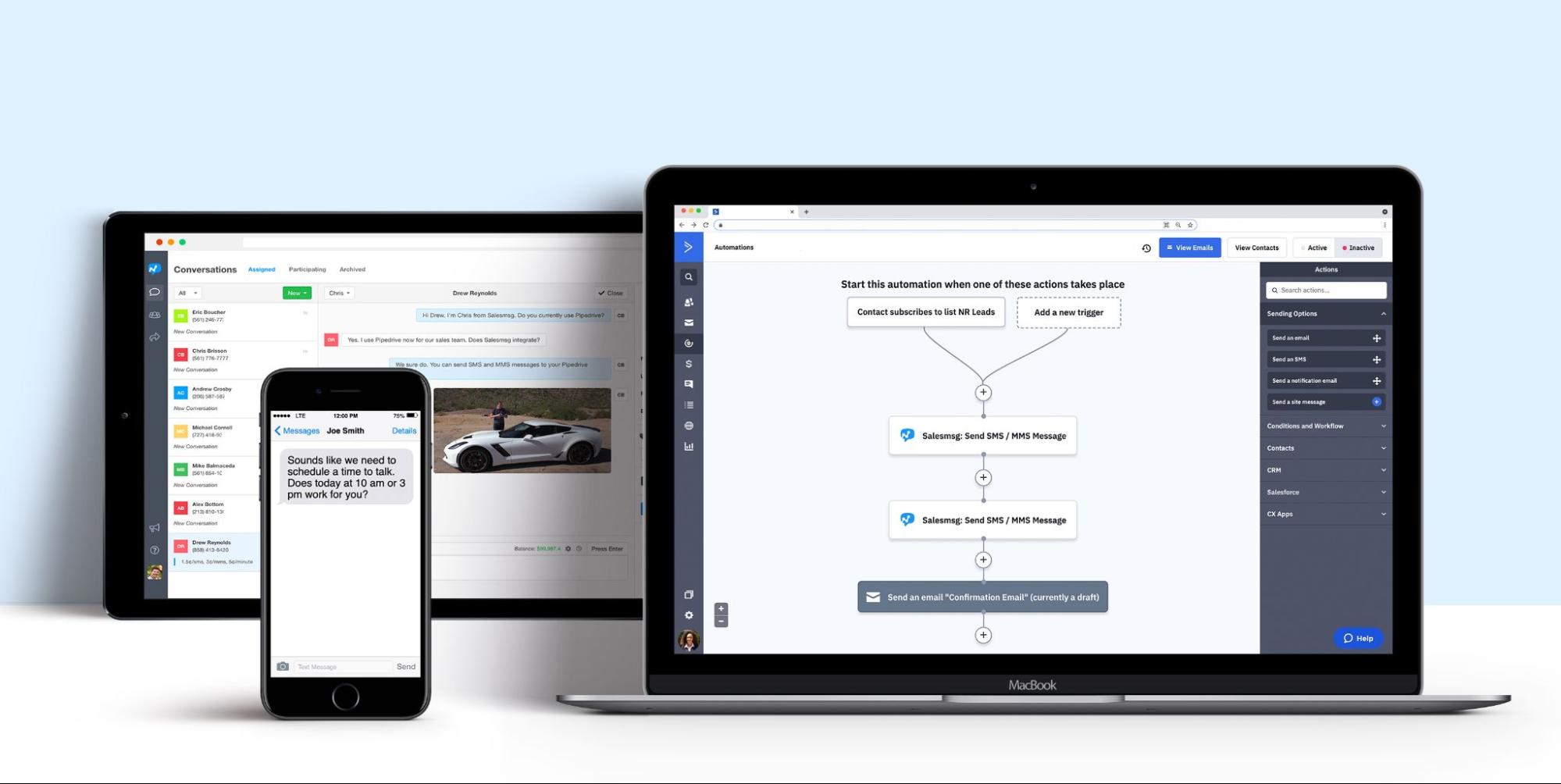 Step 1: Build an ActiveCampaign SMS automation to send a Salesmsg to the list of leads.

Step 3: Create canned messages inside Salesmsg ,like “Sounds like we need to schedule a time to talk. Does today at 10 am or 3 pm work for you?”

Step 4: Create an ActiveCampaign automation to immediately send an email and text message confirming the meeting as well as a reminder 2 hours prior.

And if you really want to boost your results, use the Salesmsg multiple inbox feature to send messages from your prospect’s area code or time zone. 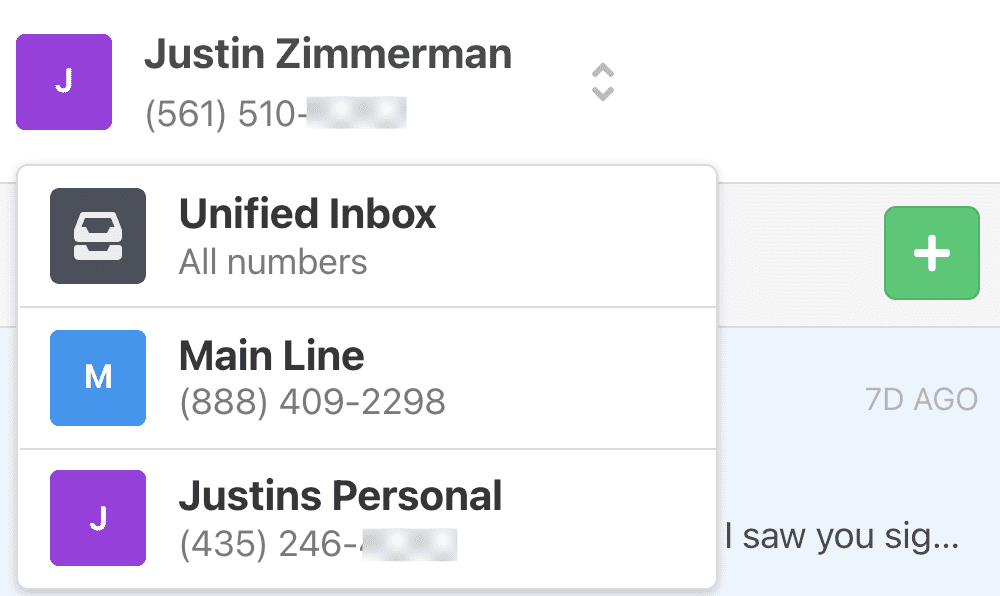 Don’t let the simplicity of this campaign fool you into undervaluing its effectiveness. As Jim says: “People don’t want to answer their phones” and with most leads “someone probably called a couple of times, left a voicemail, and then marked them as ‘gone cold.’”

The ActiveCampaign and Salesmsg integration makes it easy to add SMS to any automation. Once integrated, you can trigger an SMS to send based on any action. The specific action is up to you. Campaigns can be triggered when a new order is created, an appointment form is submitted, or a tag is removed.

To learn more about the different ways you can use Salesmsg SMS within ActiveCampaign, check out our dedicated resource page.